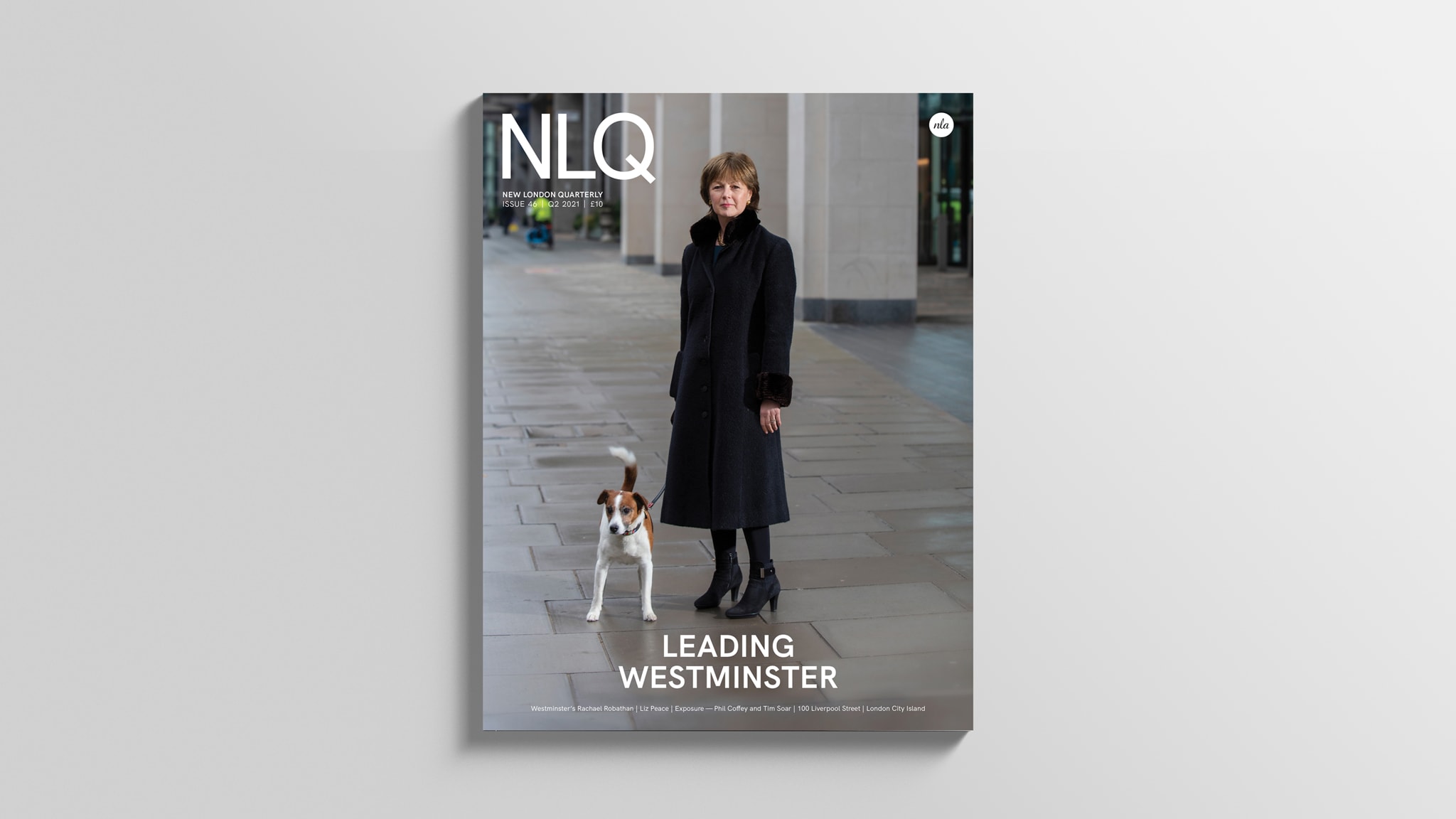 The concept of London’s ‘centre’ is an interesting one. Is it Westminster, where its parliament sits, alongside government departments and Buckingham Palace? Or is it still its original home in the square mile, with its historical, financial might? Or, indeed, is it in fact its exact, geographical centre, which is marked by a plaque in the Church of St Martin’s-in-the-Fields, overlooking Trafalgar Square?
All of these places have a good shout, but Westminster is the latest to turn its attention to create an overarching vision — A City for All — aimed at luring people and life back into the centre in a post-COVID bid to turn its fortunes around. We meet leader Cllr Rachael Robathan — and her dog, Tavy — this issue, to talk through the local authority’s vision for a greener, cleaner fightback, put together by a crack team including Debbie Jackson, formerly of the GLA, and Elad Eisenstein, mastermind of the new plans for the Oxford Street District.
Part of that vision is to concentrate on revitalising the hard-hit retail zone around Oxford Street via projects that include a temporary Marble Arch ‘Hill’, and, also in this issue, not a stone’s throw away is Reef’s plans for a subterranean complex near to Harley Street. The City, meanwhile, is fighting back through a clutch of permissions for office towers at Gracechurch Street by Fletcher Priest and KPF, while Hopkins Architects feature in this issue with its Broadgate-boosting reworking of 100 Liverpool Street.

London, though, is a collection of villages, perhaps more so in the age of the 15-minute city and a concentration on densification in outer areas, and our other building study encapsulates that in part, the English National Ballet adding culture to a residential mix at EcoWorld Ballymore’s London City Island. Liz Peace, meanwhile, straddles both the centre and outer London with her dual roles of overseeing the restoration of the Houses of Parliament and — with equal complexity — the redevelopment of Old Oak and Park Royal.

Ultimately, as we look beyond a year of strife for the capital, the social and vocational ‘central perks’ — as the café on Friends was called — need to eclipse those of places closer to home.

FEATURES
The new teams 14
Westminster is shaping up to fight back after COVID. David Taylor talks to leader Rachael Robathan and Debbie Jackson

NEW Exposure 26
In the first of a new series David Taylor investigates the complex relationship between architect and photographer — first up, Phil Coffey and Tim Soar

In practice... 38
Louise Rodgers and Rachel Birchmore present some hints and tips for visible leadership in uncertain times

Special feature 42
London Real Estate Forum Investment Summit — who said what, how it all began, and what comes next...

Need to know 4
The quarter — our summary of all the key news events this term
Viewpoint 8
We ask: what is your one wish from the next London mayor?

Briefing notes 58
Our regular round-up of conferences and events at NLA
My London 132
Architect, co-founder of Our Building Design and FAME Collective’s Tumpa Husna Yasmin Fellows on Dickensian London and Southwark