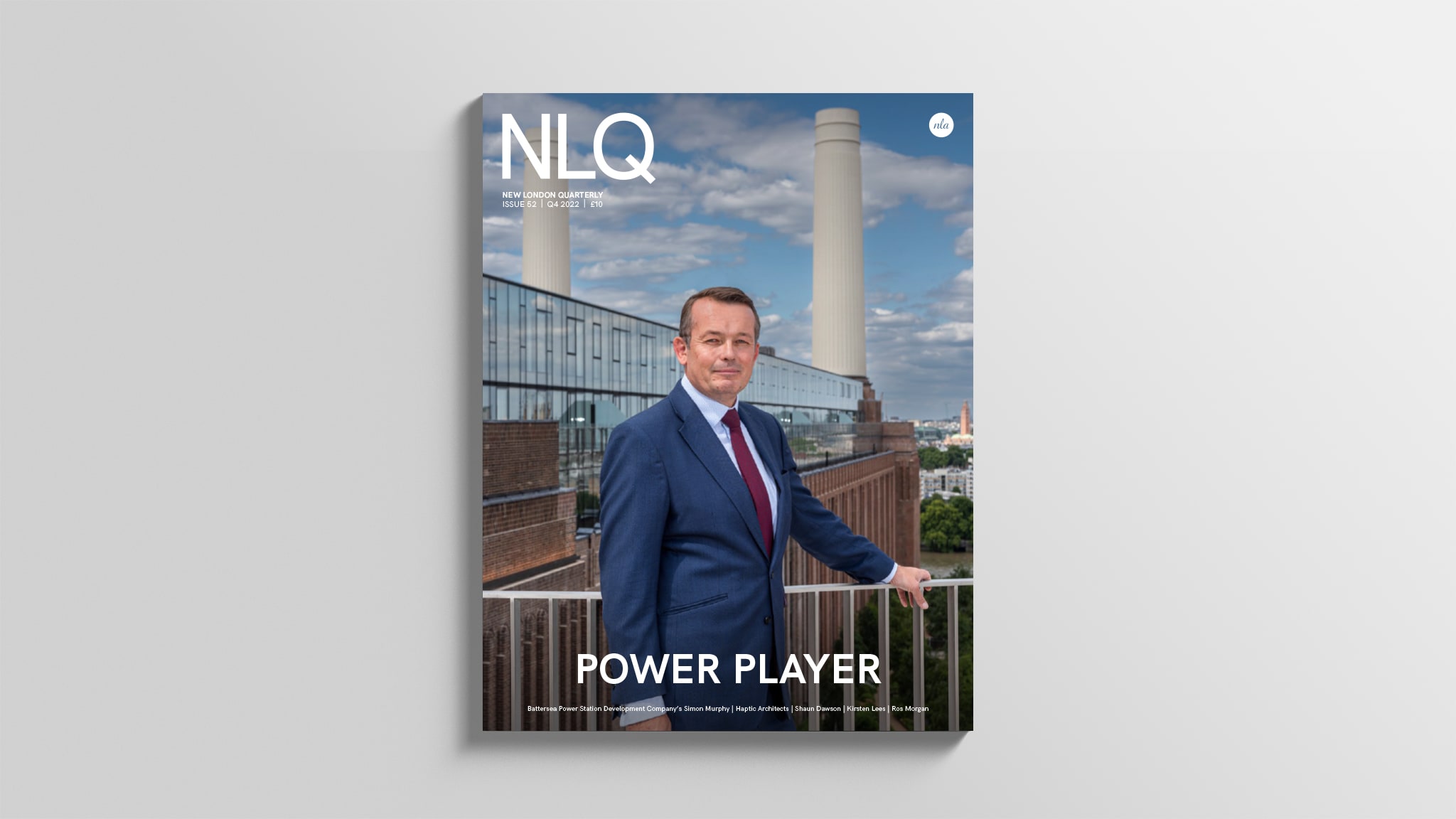 Barring Big Ben and Buckingham Palace, there are few more recognisable London landmarks than Battersea Power Station. From its original function, keeping the capital’s lights on, to Pink Floyd album covers, to Margaret Thatcher, and on into multiple failed regeneration schemes and ownerships, those four chimneys have had an enduring, iconic appeal.
And now, after decades of work, it is finally with us in its latest configuration, restored and renewed thanks to Simon Murphy’s Battersea Power Station Development Corporation, and a team including Wilkinson Eyre. Although it sits in an area with a mixed reception in terms of the developments further up Nine Elms, it has brought about a new tube station and acted to secure key tenants including Apple, offering this corner of London a new lease of bustling, contemporary life. Murphy kicks off our building review of the scheme this issue, while another project with ramifications for a new generation of offices, Fabrix’s Roots in the Sky, figures as our project preview.
We continue our celebration of the 10th anniversary of the London Olympics with a profile of ‘Mr Olympics’ Shaun Dawson, an ever-present figure from the bid process right the way through to today, celebrating 25 years at the Lea Valley Regional Park Authority and unveiling the next built projects on a successful legacy conveyor belt.
Another contributor to that legacy is Haptic Architects, which delivered an innovative car park now serving Here East, as well as some nascent schemes at King’s Cross and in Oslo. Louise Rodgers gets under the skin of the ‘Haptic Way’, discovering how its happy team continues to thrive and prosper in London and Norway.
There’s plenty more besides: a look at ergonomics in design; and Gensler taking us through the way it works in its new(ish) offices, and exporting expertise elsewhere. Peter Murray reviews a new book on the suburbs, we take a look at the enduring and often thorny subject of succession, and our 15 Expert Panels report on the progress they are making towards the New London Agenda, capped by an in-depth essay by cities expert Greg Clark.
The age of the ‘icon’ may be gone, but the multi-project, grand vista of the Olympics in the east and the revitalised chimneys of Battersea in the west present a snapshot of the New London emerging from its industrial past into a digital future. It is still powering ahead.
Enjoy the issue!
David Taylor
Editor

FEATURES
The new teams 12
Louise Rodgers gets under the skin of Haptic Architects
Profile 34
David Taylor interviews ‘Mr Olympics’ — Shaun Dawson of the Lee Valley Regional Park Authority
Ecocity 44
Amy Chadwick-Till asks why we aren’t being more ambitious when it comes to urban nature
New London Agenda Special 50
Greg Clark outlines the New London Agenda; NLA Expert Panels reveal progress
Project preview 84
The team behind Roots in the Sky describe how the project is a ‘vehicle for change’
Building review 90
Power play — the new-look Battersea Power Station opens for business
REGULARS
Need to know 4
The quarter — our summary of all the key news events this term
Viewpoint 6
We ask: given LREF’s main theme, what is one way that London can ‘think beyond’?
Murray Mint 10
Peter Murray looks at the long-running debate over plans for suburban intensification
Opinions 32 | 42
Blum’s Amanda Hughes on ergonomics and ageing; JRA’s Festus Moffat on wellness and Bloom
Columnist 66
Yolande Barnes charts the effects of good and bad governance on the city
Briefing notes 72
Our regular round-up of conferences and events at NLA
Coffee break 102
Grimshaw’s Kirsten Lees on the practice’s new Foundation, and more
My London 152
Heart of London Business Alliance’s Ros Morgan in praise of the West End
PLUS...
How we work 20
Gensler’s Nigel Lea on the firm’s London HQ — and practising what it preaches
From the team 24
NLA’s Benjamin O’Connor on the upcoming LREF and his own background in art and galleries
Succession 26
ING’s Leanne Tritton and RSHP’s Tracey Meller and John McElgunn address succession
Reviews 68
Peter Murray reviews two new books about Eric Parry and Robert Davis
Market essay 106
JLL’s Marcus Dixon takes a look at the prime residential market in London